Ballooning, the experience to be lived

Discover Besalú and, from the air, the entire volcanic area of ​​La Garrotxa!

It is important to reach Besalú in the early afternoon for your guided visit, which will reveal the charm of some of the least-known corners of one of the most important towns in medieval Catalonia.
It is part of the Spanish network of Jewish towns that attempt to keep alive the memory of the Jewish past of medieval Spain. Of most interest are the synagogue and the purification baths (Micvé), the latter one of only three such baths known in Europe.

You will sleep at the Casa Marcial hotel, a three-star hotel located in a privileged place in Besalú.

It has 12 rooms distributed in 2 buildings. The main one is listed and dates from the late 19th and early 20th centuries.

The garden has an area of ​​over 1,200 m² with remains of a 10th century wall. It has the Romanesque apse of the 12th century collegiate church of Santa María and remains of the wall from the same period.

We find a pool with a design integrated into the environment of the medieval remains and a padded platform that becomes a space for relaxation and disconnection.

We will meet you early in the morning (between 7 a.m and 8 a.m, according to the season) at Vol de Coloms facilities to take you up in the hot-air balloon over the La Garrotxa Volcanic Zone Natural Park.

Have a cup of coffee and some pastry before the balloon flight, which lasts around 1h or 1h30 min.

All our baskets have a door so, they are accessible to all kinds of public.

As the balloon is carried by the wind and you contemplate a bird’s-eye view of the landscape, you can sip a glass of cava and try a slice of coca de llardons, a savoury local cake.

Once back on solid ground, our ground team, who have been following our flight, pick us up in a 4×4 vehicle and take us to enjoy a hearty cooked breakfast of bread and tomato, Santa Pau haricot beans and botifarra a catalan national dish, desserts from Cooperativa la Fageda, wine and ratafia, a local herbal liquor.

Finally, we give you a flight diploma signed by the pilot. 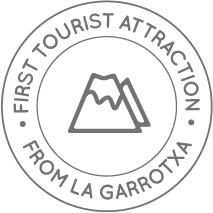 Do you need help?
Chat with us
We usually answer in a few minutes
We use cookies on our website to give you the most relevant experience by remembering your preferences and repeat visits. By clicking “Accept”, you consent to the use of ALL the cookies. However you may visit Cookie Settings to provide a controlled consent. Read More
Cookie settingsACCEPT
Manage consent

Analytical cookies are used to understand how visitors interact with the website. These cookies help provide information on metrics the number of visitors, bounce rate, traffic source, etc.

Cookies that may not be particularly necessary for the operation of the website and that are used specifically to collect personal data of the user through analysis, ads and other integrated content are called unnecessary cookies. You must obtain the consent of the user before running these cookies on your website.

Uncategorized cookies are those that are being analyzed and have not yet been classified in any category.

Advertising cookies are used to provide visitors with relevant advertisements and marketing campaigns. These cookies track visitors through websites and collect information to provide personalized ads.

Send this to a friend